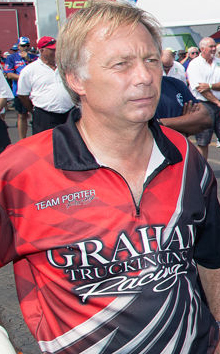 Bryan obtained his Lycoming Engine knowledge when he started his career in 1980 working for Standard Aero (a Avco Lycoming Service Centre). He was the T55 Service Engineer for their T55 engine program.

In 1986- Bryan was introduced to Hydroplane racing when he consulted with the Miss Budweiser to help them with their engine program, working with Ron Brown Dewy Norton and Tim Ramsey.

In 1987- The following year he was the engine specialist for the Miller American racing Team (Fran Muncey owner) where he first worked with Chip Hanauer.

1988- he went to the Sutphen Spirit in 1988 ,Richie Sutphen owner where he established and ran his engine program and worked with Mike Hansen. A mid-season blow over ended the Sutphen program. After the blow over he returned to Fran Muncey’s Miller American / Circus Circus team to refurbish their engine program.

1990-91 he established and ran the engine program for Bob Fendler’s U-19 racing team first working with Steve David.

1993-2001 he started one of his most memorable endeavor’s when he became the Engine Specialist for Fred Leland in 1993. He established and ran Fred’s engine program for that time period where he worked with many Drivers. most memorable being Mark Evans (Flip and Win) and Dave Villiwock (Fred’s 1st win 1994 Seattle, 1996 National Championship and Gold Cup) and of course in 1999 he was reunited with the Legend Chip Hanauer, for his several wins and final Gold Cup and race win.

2014-2017- Joined Graham trucking for the last races of that year San Diego and Doha and stayed with the team up until and including the transfer of ownership to Rob Graham in 2017 and his first win in Tri Cities.

Bryan has been a part of 3 APBA Gold Cup wins and one National Championship 1996, Gold cups in 1996 with Dave Villwock in PICO American Dream, 1999 with Chip Hanauer, his final Gold Cup and unlimited win, and 2016 with J. Michael Kelly in the Graham Trucking.