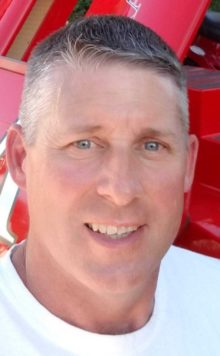 U-98 Fuel, Deck, and Ground Support

Chris was introduced to boat racing in 2008 when he attended his 1st race at Lawrence Lake, Yelm, WA. This is where he met Brian Hajny. Brian was racing his 2.5 stock when Chris started talking to him about his boat. Brian suggested that maybe Chris should Stick around And invited him to Come down and check out his shop. What an amazing ride it has been since then. In 2009 Brian Hajny teamed up with Mike Hofhine in his 2.5 stock the S 12 and Invited Chris to be part of the crew . Chris couldn’t have been more excited. He really needed something exciting besides working all the time. Chris Has been working as a mechanic for the ports of Tacoma and Seattle in the cargo Container shipping Industry since 1992. He soon found out what boat racing was all about, it’s a lot of work. But man it sure is rewarding. What a wonderful family he has been lucky enough to have been invited into. Brian introduced Chris to Jeff Bernard and Kip brown and the E 55 in 2009 and a 2 boat 1 team was created. Chris Help crew on several high point championships won. Jeff Bernard’s 5 Liter the E55. In 2009 , 2011, and 2012 And Mike Hofhine and Brian’s hajny’s 2.5 stock S12 in 2010 and 2012. What an experience for someone who just happened to show up at a race one day. 2015 Chris was part of Jim Harvey’s and J Michael Kelly’s Crew that won a national high point championship with their 5 Liter . Chris also helped crew with Corey Peabody on his 1 Liter . Chris has been a part of some pretty amazing moments. He looks forward to being able to Help contribute in whatever way he can And share his experience and knowledge he has with the Graham trucking Race team. Chris Would like to Thank Rob Graham, Brian Haney and Corey Peabody For inviting him and allowing him to become part of such an amazing group of people and into the unlimited racing world. Thank you.