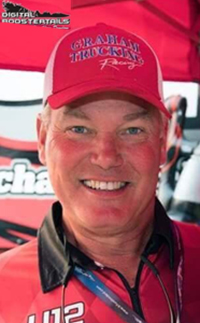 Jeff Kelly has been involved in hydroplane racing nearly as long as he can remember. He first was introduced at age 8 when his father raced outboards in 1965. Jeff himself raced outboards from 1980-2005 and is still very involved in outboards with both son J. Michael Kelly and daughter Kristina running his 45 SST boats.

Jeff’s first unlimited was the 2004-05 Graham Trucking with Jim Harvey, then moved to Dave Bartush’s Graham Trucking team from 2006-08 and then to Team Porter for 2009-10 with the U-7 Graham Trucking. In 2011, when JMK went to the Schumacher Racing Team, Jeff went there as well. Over the years, he has worked just about every position on the unlimiteds except props. He was also involved in building the Schumacher hull in 2011.

Jeff Kelly is currently partners with JMK on U-12 Racing/Graham Trucking hydroplane.