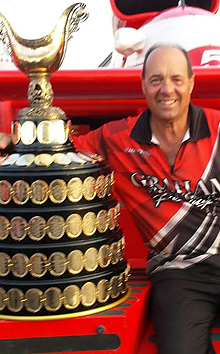 Sandy Pearl is another veteran of unlimited hydroplane racing. Sandy has worked on the deck along with other duties for a number of teams including Bob Fendler’s U-19 Jackpot Food Mart/Ms Pog. He was also a member of Ken Muscatel’s U-25 Superior Racing, Schumacher’s 88 Degree Men/U-37 Beacon Plumbing and the O’Farrell’s U-21.

Sandy also races outboards in the 45 SST class.  He is an engineer with the Boeing Company and lives in Lake Tapps, Washington with his wife, Cory.