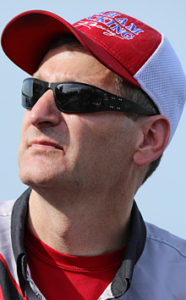 Anderson has been involved in unlimited hydroplane racing as a crew member for over 30 years. Tom’s early years in the sport were spent primarily as a turbine engine specialist for several teams including Mr. Pringles, T-Plus and Miss Budweiser.  He first became a crew chief for Ron Jones Jr in the mid 90’s and went on to work with owners Jim Harvey and Fred Leland.

Tom joined Ted Porter’s PPE, LLC  team in 2007 and moved to Crew Chief of the U5 in 2008 where he and Jeff Bernard scored their first victory in only the second race of the season at the Indiana Governors Cup in Madison Indiana.  The team went on to be the only repeat race winners in 2008 by capturing the Bill Muncie Cup in San Diego, California.  Since 2008, Tom has twice been awarded Crew Chief of the Year and the U5 team along with drivers, Bernard, Jimmy Shane and J. Michael Kelly have compiled an impressive record of 3 World Championships, 1 National Championship and 18 victories, and 1 Gold Cup, making them one of the most successful teams in recent years.

Professionally, Tom left full time boat racing in the late 1990’s to work in Boeing’s wind tunnels operating the Transonic and Super Sonic tunnels.  He has since left Boeing and is a manager for Blue Origin where he enjoys building space vehicles.  Tom, wife Kellie and son Brody live in Renton, Wa.